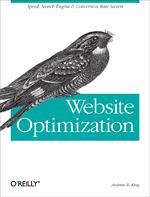 In this issue we've got three new items for you. First up, we review Google's Web Accelerator software for surfers and webmasters. If you've got broadband and the right browser, this gizmo speeds up the Web. Second after we ran our eGovernment Site Credibility review we were contacted by the government of Australia. After running our website spell checker and fixing their typos, the Aussies now come out on top with no errors. Good on ya lads! That was one of the goals of our study, to raise awareness of these credibility issues by reviewing high profile sites, and to improve them.

Finally, we've been talking to Ryan Levering, a PhD student at Binghamton University. Ryan co-authored an article titled "The Portrait of a Common HTML Web Page" with Michal Cutler that appeared in DocEng'06 on October 1013, 2006, in Amsterdam, The Netherlands. For his PhD project Ryan wrote his own HTML rendering engine dubbed WebSeer. We asked Ryan to run a crawl to find size information of the average web page. We report on some preliminary results.

Use a Web Accelerator
We review Google Web Accelerator to see how well it speeds up web browsing. Web accelerators speed up web browsers with look-ahead caching, HTTP compression, and proxy servers. This tutorial includes webmaster information.
Update: eGovernment Site Credibility: Comparing Speed, Accessibility, Typos, and Validity
After our initial review, Australia had their site spell checked and corrected, totally eliminating their spelling errors. Australia now tops all countries tested with zero spelling errors.
The Average Web Page
Reports on some preliminary results of the average web page run for WSO by Ryan Levering. The average web page is about 130K in size with 25K of HTML. GIFs are relatively small below 3K while JPEGs, PNGs, and Flash files get progressively larger. CSS and JavaScript files total over 28 and 37K respectively for pages that use external style sheets and scripts.